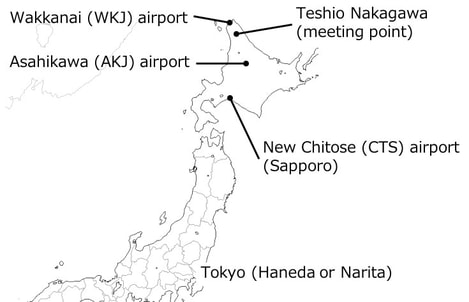 
2-1) Tokyo (HND or NRT) - New Chitose (CTS) provides the largest number of flights and they are often cheapest. So the connection between flight and train is often easiest (from HND). You can take a train from the airport. The train from CTS airpot to Teshio Nakagawa railway station takes 4.5h- 5.5h and costs about 10000JPY for one way.

* There is train and bus transportation between Narita airport  and Haneda aiirport(1.5-2h, about 3000JPY for one way).
* The railway (JR) offer the round-trip discount, which is available when you go back the same way you have come.

The participants stay at the dormitory of Teshio Experimental Forest. The accommodation fee is already included in the participation fee.
Laundry machine, refrigerator are available for free.